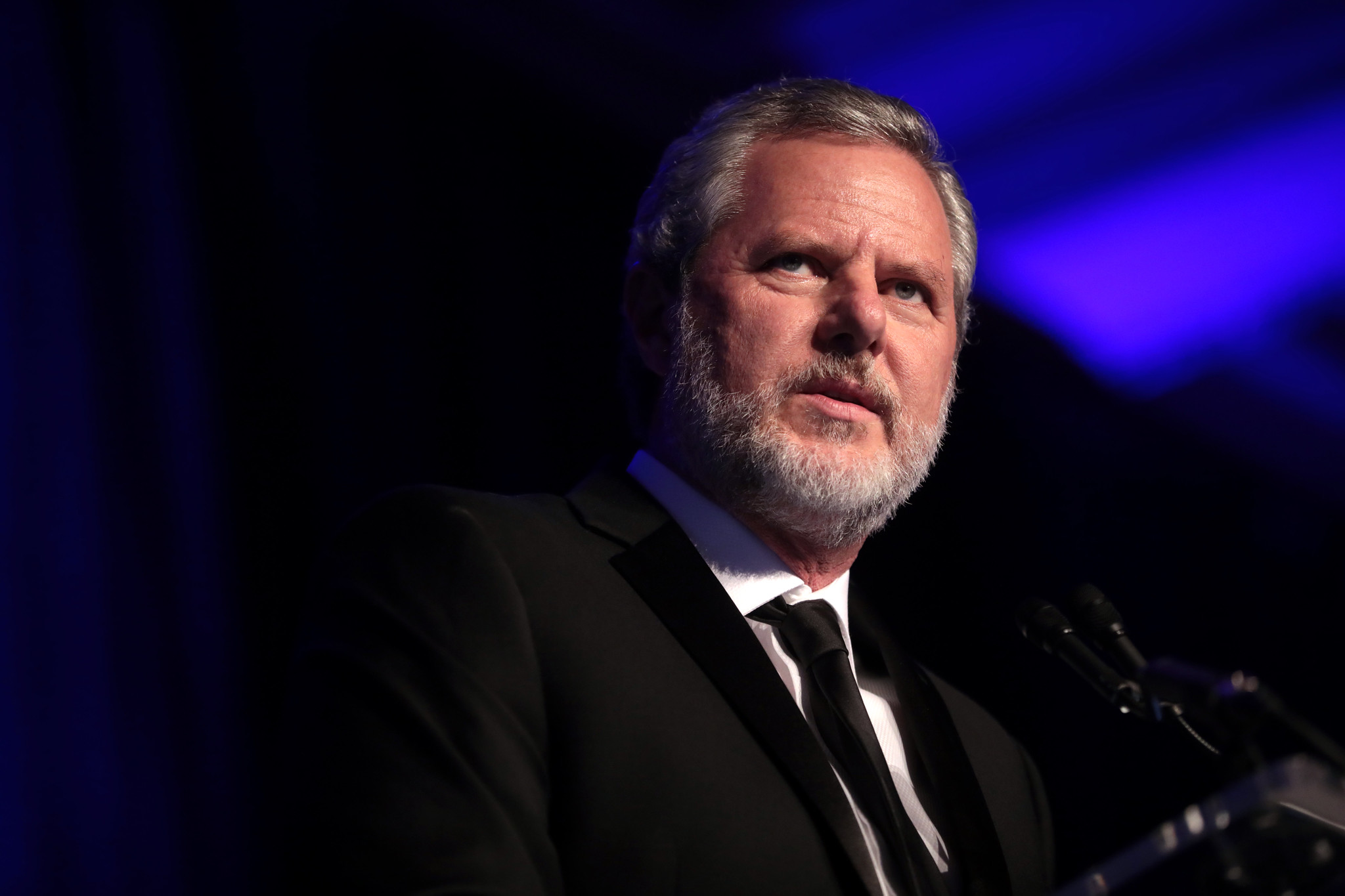 The multi-generational saga of the Falwell family of Lynchburg, Virginia has always been a dramatic epic of sin and redemption. According to Jerry Falwell Sr.’s autobiography, Strength for the Journey (which was ghost-written by fellow evangelical, Mel White, before he came out and became a gay activist), Falwell’s father, Carey, was a bootlegging entrepreneur who killed his brother, Garland, in 1931 during an exchange of gunfire. Garland was drunk, high, recently out of prison, and on a violent rampage. Although it was a clear case of self-defense, Carey coped with his guilt by drinking, becoming an alcoholic before his deathbed conversion.

Jerry and his twin brother, Gene, were born under this shadow in 1933. Jerry’s own journey toward Christian faith was not an easy one either, but after a rough and rowdy youth he was converted on January 20, 1952. This eventually led to his call to be an Independent Baptist preacher and pastor, the founder of Thomas Road Baptist Church, “the Old-Time Gospel Hour,” Lynchburg Baptist College, and the Moral Majority, a conservative Christian movement which helped put Ronald Reagan in the White House and established the Religious Right as a powerful force in US politics.

Lynchburg Baptist College became Liberty Baptist College in 1975 and was rebranded ten years later as Liberty University. It is now one of the largest and wealthiest evangelical Christian universities in the world. Jerry Falwell Jr, who inherited the presidency from his father after he died of a heart attack in 2007, transformed the university’s fortunes. But his forced resignation after allegations of sexual misconduct have compromised both the redeemed family name and the institution. There will be plenty of commentary on whether Liberty’s moral reputation can fully recover, but Liberty has arguably never been the academic success Falwell Sr. had envisaged.

The Liberty University I attended from 1988 to 1992 was still small, struggling, and deliberately trying to transcend its past. The name change signaled a strategic shift away from its fundamentalist roots toward a broader, more generic evangelical identity.  It planned to take its place alongside established schools such as Wheaton and Calvin as a national evangelical institution of higher education.

Rightly or wrongly, that’s why I went there. A native Virginian with a conservative but eclectic religious background, I would never have attended “Lynchburg Baptist College,” but going to “Liberty University” to study Christian philosophy and apologetics with respected scholars such as Gary Habermas and J. P. Moreland seemed like a feasible proposition to my 18-year-old self. (I graduated from Liberty with a B.A. in philosophy and then went on to graduate studies in theology, ordination in the Episcopal Church, and an eventual academic career. My theological and political convictions have thus taken me in a different direction than “the Liberty Way”).

However, as theologically and politically conservative as the school I attended was (the commencement speaker at my graduation was Pat Buchanan), after eight years of Reagan and during the four years of George H.W. Bush, Falwell Sr. was enjoying the fruits of victory. The ambiance in this period was thus generally more complacent than combative, with a focus on developing a “Christian worldview” (of a very particular sort). I thus believe that seeking to build Liberty into a bona fide university was the genuine ambition and agenda, although a process that was just getting started.

But despite its subsequent growth, its rankings and reputation indicate that Liberty has never achieved the academic excellence that Falwell Sr. hoped for. What went wrong? Well, lots of things. It maintained a belief in biblical inerrancy and young-earth creationism, while also holding to uncritical free market economics and an overt opposition to “the social gospel.” There was a pervasive anti-intellectualism on the administrative level, the lack of a substantial theological tradition, and the rejection of academic freedom and faculty governance. (I remember Falwell Sr. once telling us in chapel that giving professors tenure was “like letting the inmates run the asylum.”) Liberty wanted to join the evangelical elite, but its fundamentalist gravity kept pulling it back.

Specifically, I now see that my four years at Liberty were bookended neatly by two significant events: the repeal of the FCC “fairness doctrine” in 1987 and the election of Bill Clinton in 1992. The first led to the rise of Fox News and other partisan right-wing propaganda machines both fueled by and further inflaming white resentment. The second motivated Falwell Sr. to return to the frontlines of the culture wars, abandon his higher academic aspirations, and restore Liberty as a citadel of conservativism—but with a new primary emphasis on politics rather than the old fundamentalist-modernist debates. Chapel speakers in my day were Charles Stanley, D. James Kennedy, and Chuck Colson; more recent ones have included Sean Hannity, Michele Bachman, and Glenn Beck.

Falwell Sr. died at 73 in his office at Liberty on May 15, 2007, leaving his oldest son Jerry Falwell Jr. in charge. Kevin Roose provides a fascinating eyewitness description of this transition in The Unlikely Disciple: A Sinner’s Semester at America’s Holiest University. A nominal Quaker undergraduate at Brown, Roose decided to spend a semester at Liberty in the spring of 2007 as a “participant observer” to better understand (and write about) the evangelical subculture. The book offers an astute and sympathetic but not uncritical analysis, and Roose incidentally had the last interview with Falwell Sr. before his death.

Roose concludes by describing some of the early changes made by Jerry Falwell Jr., sensible actions that seemed aimed at making the school even more mainstream and generic in its evangelicalism. A graduate of Liberty (1984) and UVA Law School (1987), Falwell Jr. is not a minister like his father or younger brother Jonathan; instead he focused on business, and it seemed that his primary goal was simply the pragmatic one of making the university succeed. And it did. Even by Roose’s semester in 2007, largely due to Falwell Jr.’s acumen, Liberty had become a wealthy behemoth. During my time it was over $100 million in debt and almost lost its accreditation. Today it has an endowment of $1.6 billion and over $3 billion in total assets.

But here’s the chronological point: The year after Falwell Jr. took charge, Obama was elected. And if Clinton’s election in 1992 galvanized Falwell Sr., Obama’s election in 2008 apparently had an equally profound political effect on his son. If nothing else, the concomitant rise of Fox News and the cumulative impact of the Clinton and Obama presidencies deeply radicalized the administration of Liberty University, pushing it (and most of white evangelical Protestantism) much further to the right, enlisting the university as a sometimes unwilling yet still complicit banner-bearer in our ongoing culture wars.

However, it now also seems sadly clear that at some point something happened to Falwell Jr. beyond conservative revanchism. Those who have remained in closer contact with the university during the past two decades can comment on these developments with more authority than I, but from many accounts the place has become increasingly unhappy and disconnected from its original mission.

Some students and faculty resented Falwell Jr.’s formal endorsement and enthusiastic support of Donald Trump in 2016 (something that even Falwell Sr. would probably not have done). Additionally, his increasingly bizarre and controversial social media posts—so at odds with the abstemious “Liberty Way” which students have to abide by—became an inherent yet discordant component of Liberty’s brand, to the distress of many graduates and current students. Thus, even before the latest story that led to his resignation, Falwell Jr. had been put on administrative leave, with the scandalous photos that he himself had posted on Instagram suggesting a degree of impaired judgment.

Not surprisingly, the fates of the Falwell family and Liberty have been intimately intertwined. Some will of course date the school’s problems from its very foundation in 1971. Maybe so. But a more charitable interpretation, even granting the conservative evangelical framework, might claim that the overriding concern with political power and wealth derailed the quest for academic excellence, which in turn undermined the institution’s spiritual and moral integrity. It allowed Falwell Jr.’s autocratic presidency and personal improprieties to remain unchallenged. Until now.

Maybe Jerry Falwell Jr. will finally face the family ghosts that so obviously haunt him. And perhaps this fiasco will be the “come to Jesus moment” that will save Liberty University from its sins. I sincerely hope so.

The Rev. Dr. Robert MacSwain is an Episcopal priest and Associate Professor of Theology at the School of Theology, University of the South, Sewanee, Tennessee.