On Thursday, October 4, Sharon Groves of Auburn Seminary and the Human Rights Campaign gave an interactive lecture about creating change from within institutions. In conversation with graduate and undergraduate students, Groves maintained that our lives are full of institutions, and yet everywhere today institutions are in crisis. It is in these crises, however, that those within institutions can grow and challenge previous assumptions in the service of a more inclusive and just future. 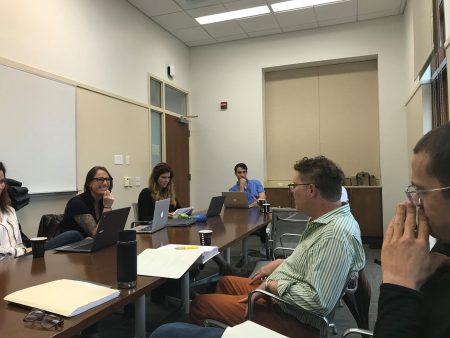 Religion and Its Publics hosted a manuscript workshop for Eugene Rogers, Professor of Religious Studies at the University of North Carolina-Greensboro, in Charlottesville on September 27th. Rogers new book is titled The Analogy of Blood, or Why Blood Persists, and offers a theological analysis of blood language. Rogers explores how the language of blood has been used, often for ill, in the Christian tradition, and offers a constructive proposal for how Christian theology should conceive of blood. 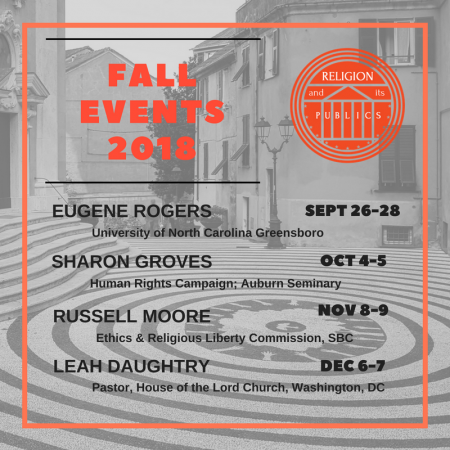 The Senior Fellows of the Religion and its Publics Project gathered at the University of Virginia for their annual week of planning and discussion.

During this workshop, Senior Fellows had the opportunity to collaborate and work on individual projects. Collaborative sessions often resembled a seminar setting, with conversation starting from a shared reading completed by each participant. These included Joseph R. Winters’ Hope Draped in Black: Race, Melancholy, and the Agony of Progress, Fred Moten and Stefano Harney’s The Undercommons: Fugitive Planning & Black Study, as well as published and unpublished works by those in attendance. In addition, Senior Fellows had the rare opportunity to gather and discuss matters of intellectual interest without constraints. For this week, the conversation was the goal.

Senior Fellows also worked with the Religion and its Publics project in an advisory and planning capacity. Convening two weeks after the Emerging Scholars Workshop, in which junior scholars had gathered to spend a week workshopping their own research and discussing writings about public theology, the Senior Fellows had the opportunity to hear a report on the Emerging Scholars Workshop and reflect on the future of Religious Studies. This generated a lively discussion on the state of the Religious Studies PhD and how degree-granting institutions train students for the demands of academic life.

Part of this reflection on the future of Religious Studies centered on essays written by the program directors, Paul Jones and Charles Mathewes. With Jones’ “A Cheerful Unease: Theology and Religious Studies” and Mathewes’ “Alexandria between Athens and Jerusalem: Religious Studies as a Humanistic Discipline” as starting points, scholars considered the role of Religious Studies within the University—a pressing issue, given the rising number of contingent faculty appointments and the culture of ‘professionalization’ in many universities. The diverse institutional settings represented among the Senior Fellows – large research universities, schools of theology, and smaller liberal arts colleges – added much to this broad conversation.

While conversation was the stated goal of the meeting, the group established multiple goals for the Religions and its Publics Project going forward. One is a programmatic statement, which makes the case for the study of religion as a necessary component of a liberal arts education; another is a book series, which would develop a lexicon of terms for the study of religion in the coming years.

Shared meals, open discussion, and a collegial environment provided the context for ideas to develop and projects to move forward. Those who workshopped their writings were challenged to improve their projects and encouraged towards future goals, and the energy devoted to utilizing and theorizing about a Religious Studies education served as a testament to the vitality and imagination of the group.