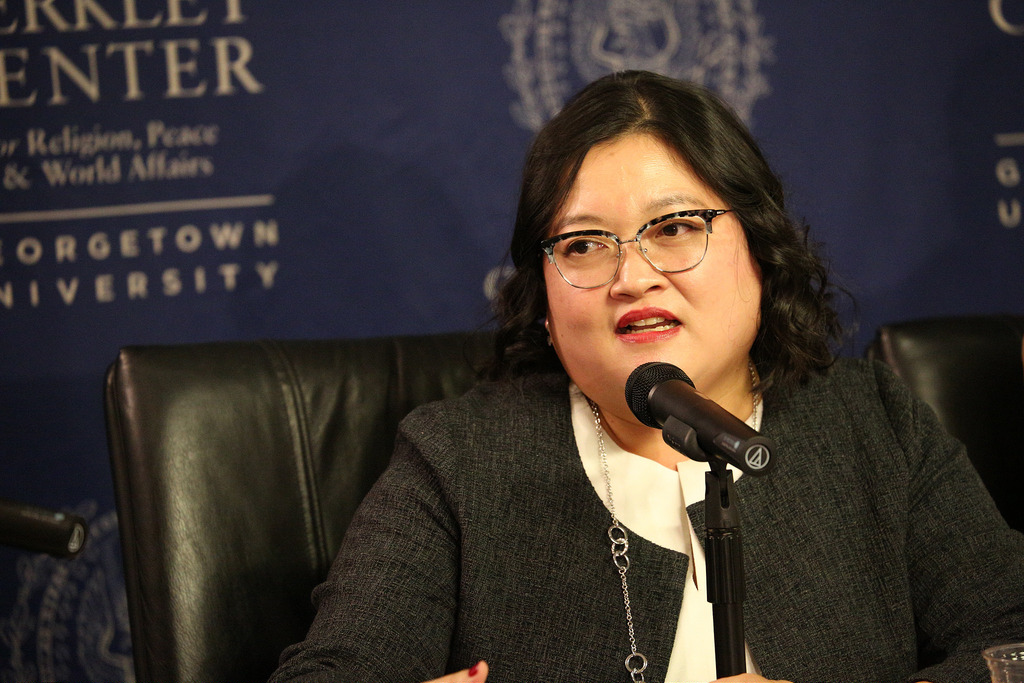 The alt-right is a specific political and social ecosystem that has many nodes. The best article that explains this universe is Joseph Bernstein’s Buzzfeed piece from 2017, “Alt-White: How the Breitbart Machine Launched Racist Hate.” With evidence from a trove of leaked emails and documents, Bernstein maps all parts of the alt-right universe; how they are connected; and deliberately take orders from Steve Bannon to infiltrate, normalize, and make racist and gendered hate mainstream. Almost all the major nodes of this universe are attached to specific iterations of the medieval past. Their message is intended to incite violent racism, xenophobia, toxic masculinity, Islamaphobia, and anti-Semitism. The alt-right is interested in using the medieval European past because it sees this historical epoch as a space of pure white religious and racial culture. I will discuss two different examples of how they use, abuse, and exploit ideas of white medieval religions in order to push their violent racist vision.

Odinists and Wolves of Vinland

The Odinists, often called the Wolves or Sons of Vinland, claim their religion is based on a medieval, pre-Christian Scandinavian belief that worships the god Odin and is organized into warrior gangs. They practice a form of toxic masculinity based on their ideas of how the barbaric warriors of medieval Northern Europe functioned as a violent warrior comitatus. Their religion, based on a pagan medieval Scandinavian religion, enacts “group rituals (including animal sacrifice) and hold fights between members to test their masculinity.” They have been regularly connected to Aryan and alt-right violence, such as Jeremy Christian’s May 2017 attack in Portland, Oregon.

Odinists have been identified as violent white supremacists for several decades. Their ideology centers on using a non-Christian religion to claim not only a pure white cultural past that they can link up, vis-à-vis Vinland (the failed medieval Viking settlement in North America described in The Vinlands Saga), but a warrior culture they can align with their visions of toxic and racist masculinity that undergirds men’s rights activism (MRA). They have more recently gotten push back from Swedish live action role-playing groups, including Vikings against Nazis, and academics who point out that the Vikings were not a pure white maritime culture but were much more akin to the practices of multiracial pirate culture of the early modern period.

Odinism and the Sons/Wolves of Vinland are violent white supremacist groups that fetishize and glorify their cherry-picked version of the medieval past and particularly a pagan, Northern European medieval non-Christian religious past. They are not interested in addressing the actual practiced religion of Ásatrú, which Iceland has recognized as a formal, organized religion since 1973. In fact, the current theology and practice of this pagan Viking religion is doctrinally LGBTQIA-supporting, inclusive to all (regardless of culture, race, gender, sexuality, etc.), rejects militarism, and has called out any white supremacist, MRA, genocidally racist version of pagan religious practice based on the medieval Viking past outside of Iceland, as one that does not adhere to their theological and doctrinal interpretation—“Ásatrúarfélagið rejects this as a misreading of Ásatrú.”

The next medieval religious frame used, abused, and weaponized by the alt-right is the medieval Catholic crusader. The Crusades were an ongoing set of memes during the 2016 election as well as during Brexit, in which #DeusVult has become a rallying cry. The #DeusVult arose from 4chan, meme culture, and video game culture. Video game culture is the gateway for the public to the medieval historical past. The distorted return of the Crusades and the Christian Crusader in imagining the West as the defender of democratic Christian values was redeployed after 9/11 by George W. Bush and his administration’s War on Terror. For a host of different alt-right groups, it specifically evokes an idea of a militaristic and racially-motivated defense of the Christian West against a racist fantasy of Islam and Muslims. All of which is historically inaccurate. The white supremacist use of #DeusVult and a return to medieval Catholicism is to invoke the myth of a white Christian (i.e. Catholic) medieval past that wishes to ignore the actual demographics and theological state of Catholicism today, let alone the doctrinal practices of contemporary Catholicism.

As the Pew Research Center has tabulated that 67 percent of the world’s Catholics in 2010 were not from the Global North, then 67 percent of the world’s Catholics were non-white. That statistic is compounded with the 2014 statistic that 41 percent of the United States’ Catholic population were racial minorities. We can firmly state that Catholicism today has a substantial, if not majority population, of non-white Catholic practitioners in the United States and around the globe. Yet, the alt-right’s vision of this medieval Catholic past is used now to uphold white genocidal and violent hate. For example, in January 2017 Alexandre Bissonnette, a French-Canadian university student, shot and killed six people in a Quebec City mosque. The #DeusVult meme and imagery used became a way for Bissonnette to identify as a violent Islamaphobic white terrorist.

But as this recent tweet shows, the connection between the medieval crusader and alt-right fascist violence is made explicit when a “crusader” dressed in medieval costume deliberately comes to harass and attack the antifascist Black Bloc at Kent State University. He calls himself the “Based Crusader,” and his medieval dress appears to highlight how much this vision is about inhabiting some imagined, white religious medieval past that aligns with the violent xenophobia, toxic masculinity, Islamophobia, anti-Semitism, and racism of the alt-right.

This alt-right vision of the medieval Catholic past has ignored 50 years of Vatican II, let alone the long history that created a global Catholicism that is made up of over 67 percent non-white Catholics. They have also ignored the consistent statements from Pope Francis that reject Trump and his numerous policies as not “Christian,” let alone aligned with the theological frames or doctrines of the contemporary Catholic Church (on the issue of refugees, fake news, truth, family separation, Jerusalem, etc.).

What the alt-right has done is pull from the medieval past what will align with their vision of a violent white supremacy in order to claim religious space. They are not practicing any form of theologically-informed, doctrinally-sanctioned version of a contemporary religion. They are also deliberately ignoring the majority practitioners of this religion (whether it is the Icelanders or the racially diverse majority in Catholicism). Instead, they are practicing a form of religiously-inflected medievalism that is based on medieval cosplay, video game culture, and internet memes.

Dorothy Kim is an assistant professor of English at Brandeis University who specializes in medieval literature.