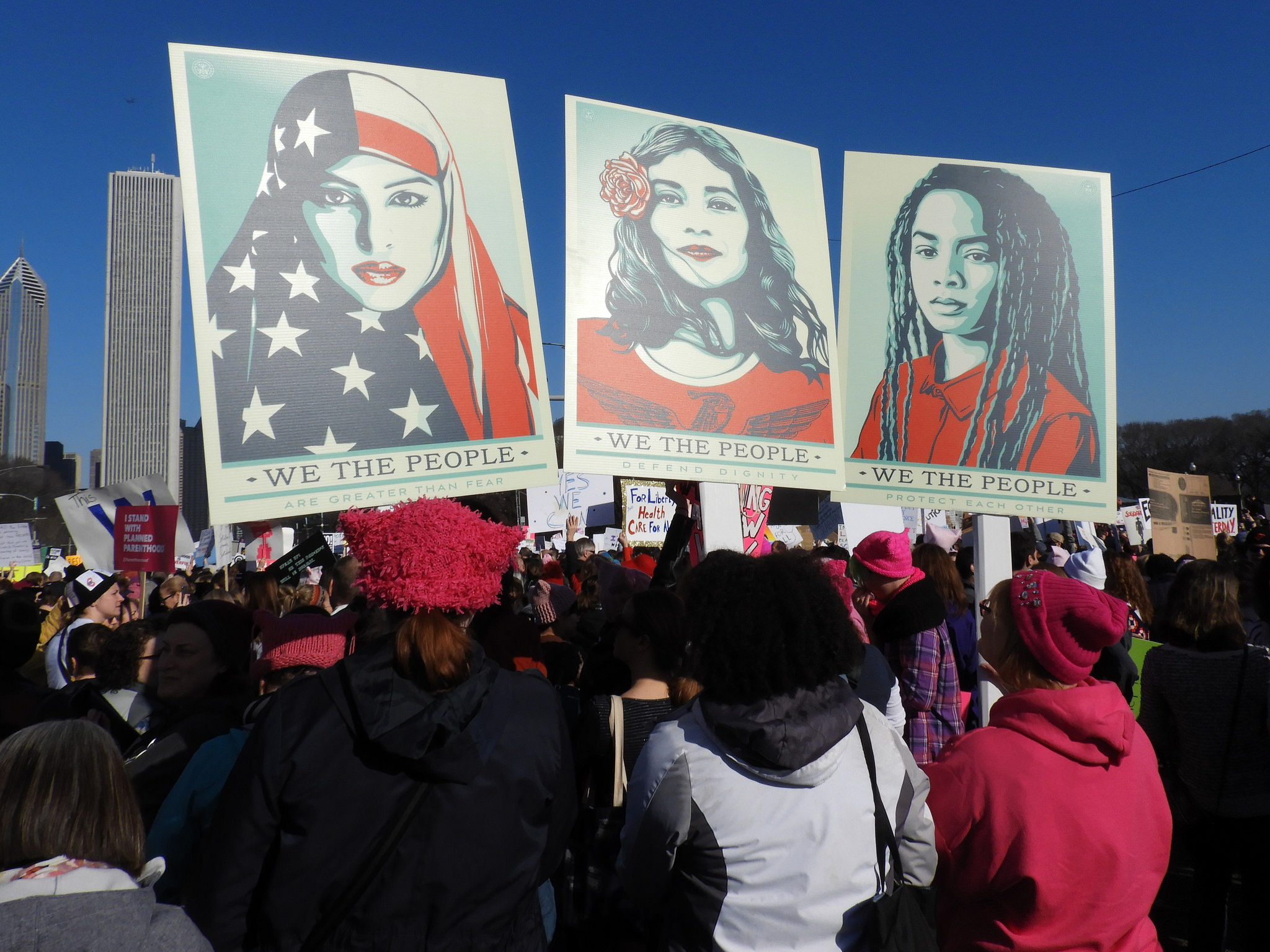 Producers, actors, politicians, businessmen, and professors: acclaimed men in these professions have recently been exposed as perpetrators of sexual violence. Powerful men abuse their power, and women are often the victims. Power is one thing these men have in common, and the maxim that power corrupts is undoubtedly true. But men whose violence is now being exposed more often than not share another attribute: charisma.

Charisma is what it takes to succeed in Hollywood, Washington, the boardroom, and the classroom—or so it seems. Curiously, the religious resonance of charisma is often forgotten in its popular usage. The German social theorist Max Weber, drawing on Christian theologians, theorized charisma as “a certain quality of an individual personality by virtue of which he is set apart from ordinary men and treated as endowed with supernatural, superhuman, or at least specifically exceptional powers or qualities.” Weber equivocates on the provenance of charisma, asserting that it may be “regarded as of divine origin or as exemplary,” but the effect of charisma is clear: Men with charisma are treated as authorities, and they attract followers.

Today, with the supernatural eclipsed by the self, charisma is increasingly regarded as a quality that can be cultivated. Bookstores are filled with titles such as The Charisma Myth: How Anyone Can Master the Art and Science of Personal Magnetism. The divine is inside the self: its potential just needs to be unleashed and you, too, can uncover your unique gift for all to see—and follow.

Charisma is rightly met with suspicion. Adolf Hitler and Benito Mussolini had charisma, as did Jim Jones, Charles Manson, and Osama bin Laden. Charisma seduces, silencing our faculty of judgment and making a charismatic man’s desires into our desires. Entranced, we come to believe that all our desires will be fulfilled by following the charismatic man—and so we forget ourselves, or our souls.

But charisma must be something else, too. We use the word “charisma” to describe Mahatma Gandhi and Cesar Chavez, Lech Wałęsa and Nelson Mandela, so charisma must not necessarily be an agent of evil. Some would respond that charisma and evil are independent of each other, but even with charisma at its best, an element of seduction seems to be at work. In some cases, the seduction contains an element of the erotic (e.g., Martin Luther King, Jr.’s personal life), while in other cases the seduction blinds followers to changing realities that call for new responses (e.g., the neoliberal wing of the African National Congress). In all cases the seduction results in a diminished capacity to evaluate the strengths and weaknesses of a charismatic leader.

When the grandeur of Weber’s vision of charismatic authority is reduced to the self-help aisle, it would seem time to turn away from charisma. Shouldn’t we be talking about Ella Baker and Fannie Lou Hamer instead of Martin Luther King, Jr. and Jesse Jackson? Shouldn’t we be talking about Alicia Garza and Kali Akuno instead of Al Sharpton? As scholars such as Charles Payne and Erica Edwards have shown, traditions of grassroots organizing and the commitment and ingenuity of ordinary people are overlooked when we focus on charisma—where charisma is solely ascribed to elite heterosexual men. In short, charisma catalyzes the circulation of ideology, so the task of the ideology critic must include demystifying charisma.

In one sense, Socrates was a champion of such a turn away from charisma. He positioned himself against the sophists, who spoke or wrote speeches for the Athenian crowds with the aim of cultivating certain desires and suppressing other desires, advancing the interests of the speaker. With words meant to elicit the emotions and confuse reason, appealing to social conventions and shared raw intuitions, sophists were unconcerned with truth. Socrates urged his interlocutors to preserve their critical capacities in the face of sophists’ attacks, committing themselves to the pursuit of truth beyond social convention, to goodness beyond self-interest, and to beauty beyond titillation.

In another sense, however, Socrates was himself a charismatic authority, using his extraordinary gifts to persuade the Athenians to turn away from false beliefs and false gods. Like the sophists, Socrates began with views commonly held in his community, but unlike them he did not end there. Rather than molding and sating the desires of his audience, Socrates elicited from his interlocutors new desires. Rather than dispensing answers, Socrates invited his interlocutors to interrogate themselves and their worlds. Rather than a slick performer whose words advanced his own interests, Socrates was utterly ordinary, in fact described as ugly, with the juxtaposition of his ordinary appearance and extraordinary critical capacities eliciting from interlocutors a sense that things are more than they appear.

Socrates and the sophists must certainly have been more complicated than this, but they serve as ideal types of two varieties of charisma that ought to be distinguished. Let us call the sophists exemplars of authoritarian charisma and Socrates an exemplar of democratic charisma. Beyond the conditions of an intellectual laboratory, out in the real world, authoritarian and democratic charisma are difficult to disentangle, but this does not mean we should abandon charisma altogether. The intuition that there might be a type of charisma worth seeking out and redeeming is strengthened when we reflect not on the businessman or politician but on that neighbor, aunt, or colleague who we take to be wise. Not wise in the sense of dispensing answers, but wise in the sense of asking the right questions.

When social movements today, from Occupy Wall Street to Black Lives Matter, talk about being “leaderful” instead of “leaderless,” they have democratic charisma in mind. They envision a movement full of people questioning the status quo and questioning themselves, not full of people slickly seducing others. At its best (which, again, is obtained only in laboratory conditions) democratic charisma is contagious. When someone witnesses democratic charisma, she realizes that she is more than she thought she was, than she was told she was. If she pursues these realizations, she too will appear extraordinary and ordinary at once, eliciting responses from still others—and catalyzing not an ideology but a social movement.

Authoritarian charisma relies on seduction, and this seduction conceals violence. It conceals the violence of the status quo, of dominant ideology, on which authoritarian charisma relies and which it reinforces. And it conceals the intimate violence involved in manipulating the desires of another for the sake of oneself. While this may sound abstract, it is invidious and personal: it necessarily means deforming souls, as it were, and it opens the door to sexual violence.

In our transactional, loveless age, is authoritarian charisma all that remains? Those vocations that call for authoritarian charisma, those modern day sophists, are setting the terms for all vocations, from clergy to non-profit “executives” to activists. On Twitter, you can count your success in charismatic self-making literally in terms of “followers.” Yet ideology, even as fierce and fluid as neoliberalism, never runs all the way down. At neighborhood association meetings, school board meetings, or people’s assemblies, we each continue to encounter democratic charisma. It is often fleeting, perhaps fugitive, as is the democratic spirit itself. Wealth and power conspire to conceal it as they champion its simulacrum, authoritarian charisma.

Yet the ability, never even nearly mastered, to discern the difference between the democratic and the authoritarian—which is to say, between seduction and love—is imperative. Flannery O’Connor explores this when she conjures the story of a bible salesman in the rural South who romances Hulga, a thirty-two-year-old philosophy PhD whose disability brought her back to her family’s farm. The confident Hulga is bemused at first, then in spite of herself is seduced. The salesman seems so simple, with his pure faith and entrepreneurial spirit—and she agrees to a tryst. There, in the farm’s hayloft, the salesman, none too subtly named Manley Pointer forces himself on Hulga, and takes off with her artificial leg.

Hulga, who chose that name over her given name Joy, as she turned away from worldly beauty, is clearly lacking in moral formation and capacities of discernment. In fact, she fancies herself the seducer, with her superior education and worldliness. The story dramatizes a struggle between two forms of authoritarian charisma: urbanity and learning against plain Bible faith and masculine vice (these two revealed to be essentially the same), the seduction of the secular liberal elite and the seduction of the self-interested chauvinist.

O’Connor’s title, “Good Country People,” is obviously ironic: Manley appears good, but he is not; Hulga aspires to be good, but she is not. Yet there are two genuinely good country people who frame the story, Mrs. Hopewell and Mrs. Freeman, Hulga’s mother and their hired help. O’Connor’s demystification of authoritarian charisma shifts the focus to the ordinary, and there we find democratic charisma. These two women bring out the best in each other as they work in the kitchen and the fields, listening to each other, provoking each other, judging the other but also judging themselves and the world. Ultimately they are keenly aware of the way the world cannot grasp them—in contrast to the purported simplicity of Manley. He seemingly fits the box the world would put him in, but such simplicity is impossible for the women. “Some can’t be that simple,” says Mrs. Freeman, “I know I never could.”

We must call out those individuals, institutions, and ideologies that seduce—and do real violence to us and those we care about—but we must also attune ourselves to the extraordinary in the ordinary around us. We will not find goodness itself, or truth or beauty, or even love in any full-blooded sense, but we may find something like charisma that can inspire us even as it threatens us. After all, to quote one of Mrs. Hopewell’s favorite sayings, at once painfully banal and poignantly true, “Nothing’s perfect.”

Vincent Lloyd is a Senior Fellow with Religion and Its Publics and Associate Professor of Theology and Religious Studies at Villanova University. His scholarship focuses on the intersection of religion, race, and politics. His books include Black Natural Law (Oxford, 2016), The Problem with Grace (Stanford, 2011), and a co-edited volume, Race and Secularism in America (Columbia, 2016). Lloyd is currently writing about the relationship between divine and human fatherhood in African American culture.