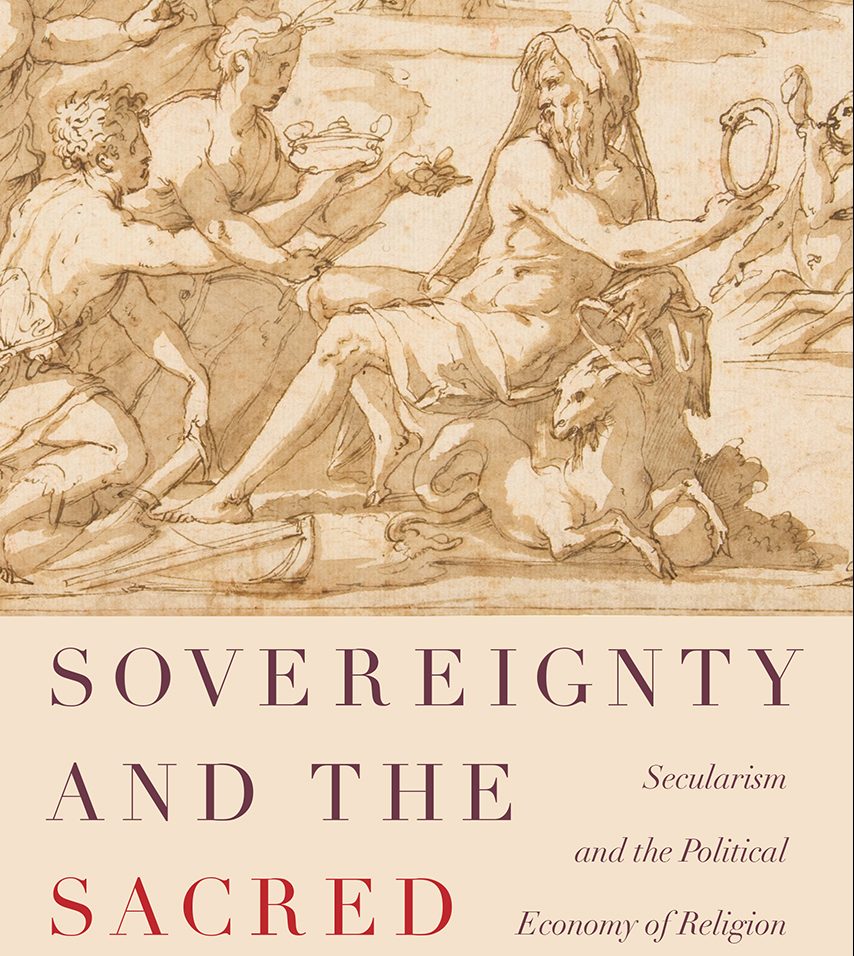 Yelle, Robert. Sovereignty and the Sacred: Secularism and the Political Economy of Religion. Chicago: University of Chicago Press, 2018.

“The goal of this book has been to reread the historical archive so as to reveal that what we call religion is an anamorphosis, a distorted image that can be seen properly only from a particular perspective, from which it reveals its true form, as sovereignty. This shift of perspective at the same time discloses an opening in the system: an exit sign. Once this shift has been achieved, it is impossible to unsee the opening. What lies on the other side is anyone’s guess.” (187)

This is the clever and bold conclusion to Robert Yelle’s excellent book. It’s clever because of its methodological signaling (I’ll return to this). It’s bold because Yelle is identifying religion with sovereignty. This is not to say that religion is identified with politics, but that it is involved—along with politics and economics—in a deeply human dynamic that pursues the ordering and disordering of collective life to an end that lies beyond ethics, beyond reason, and beyond the aims of mere civilization—a beyond to which religion and politics both remain oriented. Anyone working adjacent to religious studies, secular studies, or political theology is sure to benefit from Yelle’s synthetic brilliance.

The book also strikes a timely chord as we’ve reached a kind of impasse on the place of reason in public life—whether and how reason, realistically, has a place. Yelle refuses the neat distinction between reason and irrationality for carefully articulated reasons that amount to a claim about human nature: when things become predictable, we look for disruption; when disruption makes us vertiginous, we crave structure. This is the rhythm of our reality, an interplay between order and willfulness that structures human life across contexts. But, to my eyes, this is not a despairing volume: Yelle invites readers to reconceive our ethical questions in the face of an ambivalent reality.

The book argues, in brief, that sovereignty and the sacred both refer to an “outside” that cannot be harnessed. Moving through a sequence of topical chapters focusing on religio-political slippages and ambivalences over sacredness, law, charisma, expulsion, exception, sacrifice, production, jubilee, contractualism, and exchange, Yelle makes what he calls an empirical argument that religion and politics cannot be disentangled because both are animated by the give-and-take of the human drive to sovereignty. Indeed, he suggests that many theorists have missed these ambivalences because they are insufficiently empirical, gravitating either toward the defense of the predictable or the defense of the disruptive.

This last claim is striking because in chapter after chapter, Yelle reveals the insufficiency of the empirical disciplines insofar as they presume the fundamental rationality of human actors, and he does so by drawing on putatively non-empirical sources—theologians, religious texts, religious theorists—from across times and disciplines. At the risk of exhausting my word quota, let me name only some of the sources who reappear across Yelle’s argument. There are classics of modern religious theory like Rudolph Otto, Victor Turner, Mircea Eliade, and Mary Douglas; classics of anthropology and sociology like Max Weber, Émile Durkheim, Marcel Mauss, and René Girard; continental theorists of sovereignty like Carl Schmitt, Georges Bataille, and Giorgio Agamben; economic theorists like Gustavo Benavides and David Graeber; antiquarian biblical philologists like Julius Wellhausen and William Robertson Smith; classics of Christian theology like Anselm, Duns Scotus, and Martin Luther; and in-depth engagement with Native American traditions, Hindu traditions, Buddhism, early Christianity, and the Protestant Reformation.

By drawing on such a diverse set of sources, Yelle does employ a kind of “data-driven empirical study,” but he redirects it to examine the nature of the archive and what the archive reveals about ourselves and the “reality” we persistently recognize and recreate. The unwitting resonances between so many disparate texts discloses one of our most consistent, if paradoxical, desires: we crave both structure and a way out of its confines. We want miracle and predictability, charisma and bureaucracy, forgiveness and accountability, which means we also gravitate both toward security and the violence—or grace!—that unsettles it.

Given the range of Yelle’s material, his most important contribution will shift with the eye of the beholder. For me, a scholar of Protestant theology interested in its socio-political and imaginative impact, Yelle offers a decisive blow against the kinds of commonplaces that haunt scholarly assessments of Protestantism, such as the idea that Protestantism is inherently rationalistic, interior, or disciplinary in nature, and thus a natural engine of disenchantment. In chapter two, Yelle persuasively demonstrates that the Weberian account of charisma and bureaucracy has a much older history in early and medieval Christian theological debates over God’s will, and he frames Protestantism as a return to charisma (rather than a harbinger of bureaucratization). This argument accomplishes at least three valuable aims: it underscores theological-historical literacy as a needed critical-political lens; it undermines familiar supersessionist periodizations that frame the emergence of the secular as the rejection of religion; and it establishes conditions for better comparative assessments of European secularity with non-European (and anti-European) polities. For me, this chapter alone is worth the price of the volume.

Yet Sovereignty and the Sacred may ultimately be most provocative for its methodological aspirations, and herein lies what is clever about Yelle’s conclusion. I’ve noted the array of sources and Yelle’s facility at placing them in a conversation where they are treated fairly, affirmingly, and critically. In his conclusion, Yelle calls religion an “anamorphosis”: an image that is distorted until one acquires the necessary lens or vantage. Yelle’s mode of analysis seems to represent such a lens. It is something that is both made (by Yelle) yet also revelatory of something real (in the archive). The reference to anamorphosis obliquely signals Hobbes, the foundational theorist of western political sovereignty who also knew a thing or two about navigating the interstitial space between empirical reality and artistic construction. The famous frontispiece of Leviathan is itself a nod to anamorphic imagery. The multitude comprises the person of the sovereign who ultimately supersedes them, and the image invites the viewer’s eye to perform this journey of creation and submission.

If Hobbes’ anamorphosis makes many into one, Yelle’s does more. The many religious sources do become identified with sovereignty itself. But for Yelle, all of these sources point precisely to the sovereign as a sign: an “exit sign” that perpetually turns back against what has been created. Institutional systems focalize sovereignty only to elicit sovereignty’s diffusion back into the disruptive figures of charisma, negativity, and miracle—a sign, perhaps, of some genuine difference from what has been. Yelle’s sovereignty is a sign that recalls what Hobbes always admitted: that what is made can be unmade, that the God of Leviathan is mortal. Yet in Yelle’s hands, the visible “opening” at the heart of sovereignty is also a promise that the future of our life together will not be confined to the systems that we have already built—and this may be a glimpse of something like hope.

Michelle C. Sanchez is an Associate Professor of Theology at Harvard Divinity School.