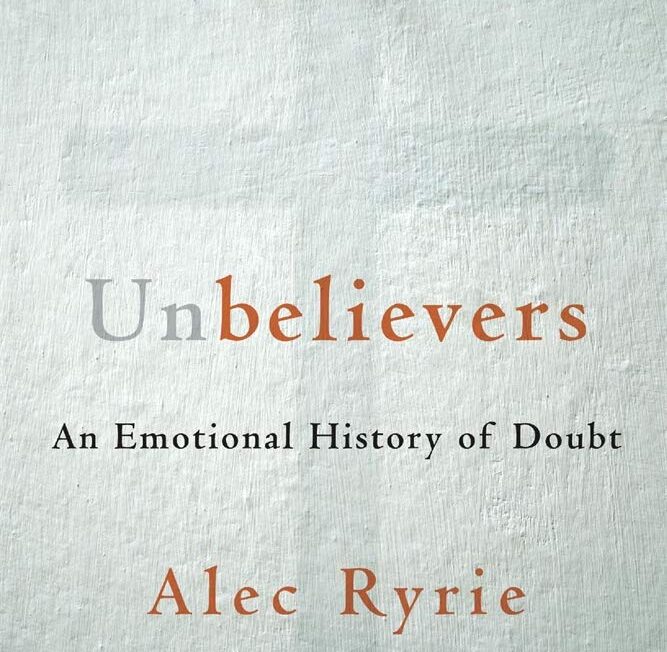 Alec Ryrie’s Unbelievers: An Emotional History of Doubt is a fascinating, original, and compelling historical study. A scholar of the Reformation, Ryrie’s interest is in the stirrings of atheism in the centuries leading up to and following 1517—the stories of peasants and publicans, philosophers and priests who began to question God’s existence, God’s wisdom, or God’s mercy. Ryrie argues (among other things) that “atheism” referred in this historic span to a range of different theological positions, not just the blunt yes/no to God’s existence.

On one level, this book is a compendium, a historian’s banquet of vignettes, quotations, and studies of figures like Montaigne, Browne, and Earle. This cascade of examples, though, is trained on an idea Ryrie articulates most pointedly in the book’s introduction and final chapter, an idea about the relationship between thinking and feeling. Specifically, Ryrie is skeptical that arguments and ideas can ever make up minds in questions of belief and disbelief. This is set up by the book’s epigraph, from Julian Barnes’ Sense of an Ending: “Most of us, I suspect . . . make an instinctive decision, then build up an infrastructure of reasoning to justify it. And call the result common sense.” Ryrie develops this with a sophisticated meditation, offered in the introduction, on the relationship between emotion and cognition, and builds even more philosophical scaffolding around it in his discussion of Pascal in Chapter 6.

Like Pascal, Ryrie is pessimistic about the possibility of persuasion using rational argument. “Apart from a heroic or cold-hearted few,” he writes early on "most of us make our lives’ great choices – beliefs, values, identities, purposes – intuitively, with our whole selves, embedded as we are in our social and historical contexts, usually unable to articulate why we have done it, often not even aware we have done it. If we have the inclination, we might then assemble rationalisations for our choices: rationalisations which may be true, but in a meagre, post hoc way" (Ryrie: 2019, 4).

So the focus is on how a sedimentation of frustrations, hopes, desires, fears, and all our other affective tissues accumulates and forms a structure that makes an intellectual posture feel compelling in the first place. The resonance between the idea and the edifice of feelings, he writes, “is not an argument; it is a gag reflex” (Ryrie: 2019, 54f).

This is why Ryrie focuses instead on the felt components of atheism, and in particular anger and anxiety. This tracing of the emotional genealogy of atheism is not, he assures us, to disdain it. Ryrie early on identifies himself as a Christian, but the book takes a winningly diplomatic attitude toward nonbelievers, repeatedly highlighting how the faithless position arrives with real and compelling moral force. Flipping the script on the bulk of recent atheist and Christian apologetic tracts, Ryrie goes out of his way to admire and honor those he disagrees with. Atheist anger—the fury of a Huxley or a Bakunin raining scorn on crooked churches—is all too powerful; and atheist anxiety—the sickness unto death of Dostoevsky’s existential self-flagellators horrified by the moral inadequacy of the world—is an extension of the most compelling currents of Christianity itself.

By design, this book is light on citations, aiming for the wider readership of interested skeptics and believers looking for new ways to map their own faith and lack thereof. That’s all fine, but it means the links between Ryrie’s work and the bigger conversations happening in the field of critical secularism studies aren’t developed here. Ryrie would be very interested in, for instance, the question asked by Ann Pellegrini: “What does secularism feel like?” And he’d be equally intrigued by her answer: “it feels a lot more like religion than we commonly suppose.” (Pellegrini: 2009, 205) Similarly, Saba Mahmood’s argument in her article “Religious Reason and Secular Affect” is that secularism comes along with its own “schesis”—its own proper set of affective attachments. (Other works in this conversation include Scheer, Fadil, and Johansen: 2019; von Scheve, Berg, Haken, and Ural: 2020; Levine: 2011; and solo-authored volumes like Bennett: 2001, Smolkin: 2018, and Sullivan: 2020.)

Even though Ryrie plugs into affective theories of atheism, he still tends to see atheism as primarily driven by a philosophical agenda. Yes, there is anger at God for failing to deliver justice, and anxiety about the tenuousness of salvation. But the extent to which these drive atheism—rather than, say, horror at priestly abuse, disgust with corruption, or contempt for false-faced self-righteousness—may be overstated here. As much as some of our twentieth century ontologies might imagine otherwise, human beings are not, by and large, moody existentialists ruminating on the cosmos. Religious disaffiliation is less often about the consummately Protestant notion of a clash of creeds than theologians and philosophers might anticipate. (And that’s not to mention the powerful intuition—both intellectual and affective—that theology and religious narrative are just plain wrong.)

Ryrie’s chorus is mostly white, male, and European. This may be a factor in one of the book’s main limitations, namely, that Ryrie doesn’t do enough to study how the emotions of atheism are linked to power. The lack of attention to how disdain for ultra-conservative religion drives people away from churches, mosques, and temples is an oversight, but so, too, is the way some contemporary formations of atheism are deeply informed by Islamophobic rage. Stephen Bullivant, for instance, points out that the unexpected runaway success of the New Atheism in the 2000s may well have been connected with a decades-long rising tide of anti-Muslim racism. I would add to Ryrie’s formula, then, not just the feelings that push people away from religion, but feelings that actively entice them in the direction of unbelief understood not just as privation, but, as Charles Taylor saw, as a new template for living in the world (Taylor: 2007, 4; Schaefer: 2017, 2022).

Monique Scheer, Nadia Fadil, and Birgitte Schepelern Johansen have written that “[e]ven to claim there is such an entity as ‘secular emotions’ is therefore already a destabilization and critique of… secular logic.” (Scheer et al.: 2019, 10) Ryrie has put together a compelling study of exactly this triangular cat’s cradle between belief, disbelief, and feeling. Most significantly, Ryrie opens doors to asking how this framework is more than just a question about religion and nonreligion. It translates into wider epistemological inquiries about how minds are made up, changed, or converted. And it transacts with political questions about how we define borders and identities. Ryrie’s challenge of the modernist autobiography that sees the secular as fundamentally about the triumph of reason over feeling is a compelling and timely intervention.

Donovan O. Schaefer is Assistant Professor of Religious Studies at the University of Pennsylvania.

Bullivant, Stephen. “The New Atheism and Sociology: Why Here? Why Now? What Next?” In: Amarasingam, Amarnath, ed. Religion and the New Atheism: A Critical Appraisal. Leiden, NL: Brill, 2010: 109-124.