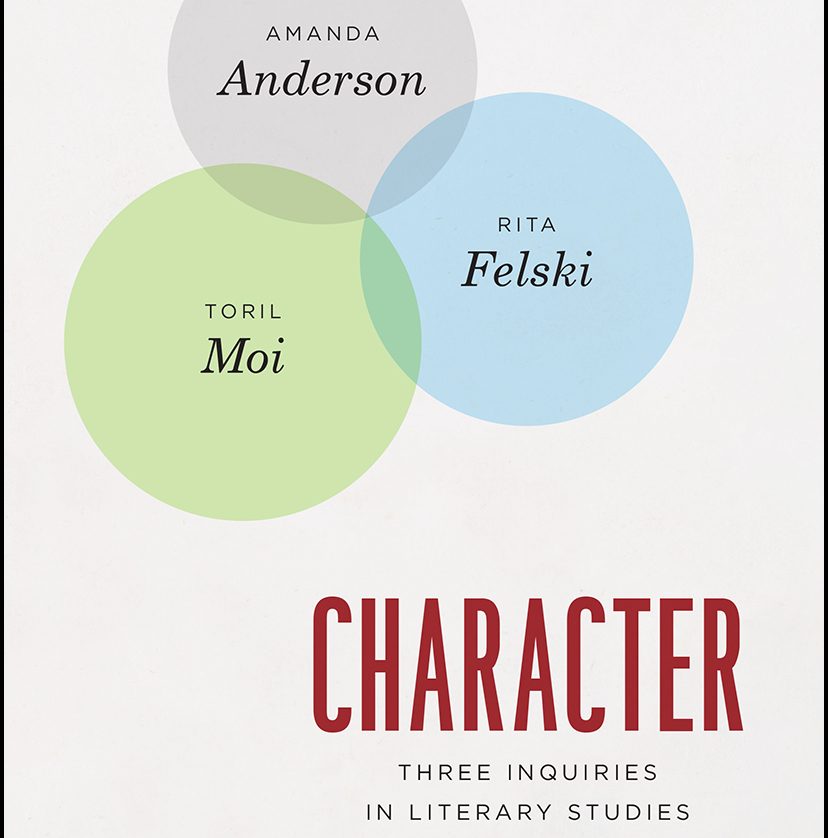 In Character, Amanda Anderson, Rita Felski, and Toril Moi reassess the place and significance of character in literary studies. They argue that a century of professionalization and formalism in the field has reduced character to “little more than an effect of linguistic, political, or […] psychological structures” (1-2). And, in their explanations of why character is so much more than this, Anderson, Felski, and Moi demonstrate why their voices are some of the most refreshing and important in literary studies today.

This small volume packs a big punch. In large part, this is because its focus on character so effectively condenses the new visions for literary studies that each author has developed in recent years. Felski’s The Limits of Critique (2015) analyzes the hold that the “hermeneutics of suspicion” has had on literary studies for the past half century, arguing for a “postcritical” approach to literature that attends to our attachments to literature and the modes of thought such attachments make possible. Moi’s Revolution of the Ordinary (2017) employs the ordinary language philosophy of Ludwig Wittgenstein and Stanley Cavell to redirect literary studies away from grand theories of literature (or character) and toward criticism that takes its departure from our ordinary ways of engaging plot, character, and form. Anderson’s Psyche and Ethos (2018) acknowledges the value of a recent turn to cognitive psychological studies of literature but argues that such studies are not adequate for helping us to understand how literature represents and draws us into the richness and depth of moral thought and experience. As the rich and essential “Introduction” to Character makes clear, these projects have much in common. Each pushes back against criticism’s long-standing obsession with the ideological functions of literature; each refuses critical orientations that tie particular literary forms to a particular politics; and each practices a criticism that affirms ordinary forms of engagement with literature and attends to the ways that literature helps readers navigate their worlds.

Moi’s “Rethinking Character,” the first essay in the volume, takes on the critical taboo of treating fictional characters as people. She traces the taboo to academic regimes of professionalization and the “modernist-formalist” paradigm that has dominated literary studies since the mid 20th century. This paradigm has invested much critical energy in trying to determine what, exactly or essentially, character is and, in the process, has proscribed certain ways of engaging it. But for Moi, both character and the ways readers engage and talk about character are kinds of “language games,” ordinary practices grounded in particular forms of life. Trying to explain such practices theoretically doesn’t really tell us anything. And proscribing them prevents us from fully accounting for the world that any piece of literature offers to its readers. Moi recommends, instead, starting with the questions and responses particular stories and particular characters engender in us.

In “Identifying with Characters,” Rita Felski follows up on her work on the attachments that readers, both academic and lay, form with literature. One of the most important of these is our identification with fictional characters. Literary critics have tended to reduce identification to empathy, but Felski argues for a broader view, identifying four modes of identification—alignment, allegiance, recognition and empathy. Her essay explores each in some detail, providing the ground for Felski’s argument that characters are made real—alive, vivid, animated—precisely by their fictional and aesthetic qualities. Thus, treating characters as persons and as real does not necessitate losing sight of the fact that they are aesthetically mediated; identification is not a sign confusion but a response to this particular form of realness.

“Thinking with Character,” Amanda Anderson’s contribution to the volume, focuses on literary representations of our inner lives. For her, literature, primarily through its characters, is uniquely able to offer a “phenomenology of the thinking life” and so to represent forms of “interior moral reflection” (131). This aspect of human life, she argues, is downplayed or ignored by critical approaches that treat the individual as an ideological fiction and moral commitment as a mere reflex of psychological forces. Her essay focuses on the particular form of thought she names “rumination,” which she treats not primarily as an obsessive, pointless churning of thought but as the processing of profound experiences, as moral thought that takes place over time and not just in instants of choice or decision.

There are critical questions to pose about the essays, and about the vision of literary studies Anderson, Felski and Moi share with us. But in conclusion I simply offer two reasons why those interested in “Religions and its Publics” should read the book. First, a literary criticism that “engages, explicates, and builds on ordinary response rather than dismissing and demystifying it” (12) takes aim at the barriers literary critics have erected between themselves and the reading public. Second, the authors’ attention to readerly attachment and the literary representation of thought and experience offers guidance for opening up the field of religious studies to new publics. Once we recognize that ordinary attachments to story, character, and community are richer and more complex than scholars often take them to be, and once we learn to attend to the ways our commitments emerge over time from thought and experience, we will find that scholarly distinctions between insider and outsider, critic and caretaker, are not as clear-cut as we often take them to be.

Tyler Roberts is Professor and Department Chair of Religious Studies at Grinnell College. He is a Senior Fellow of the Luce Project on Religion and its Publics.