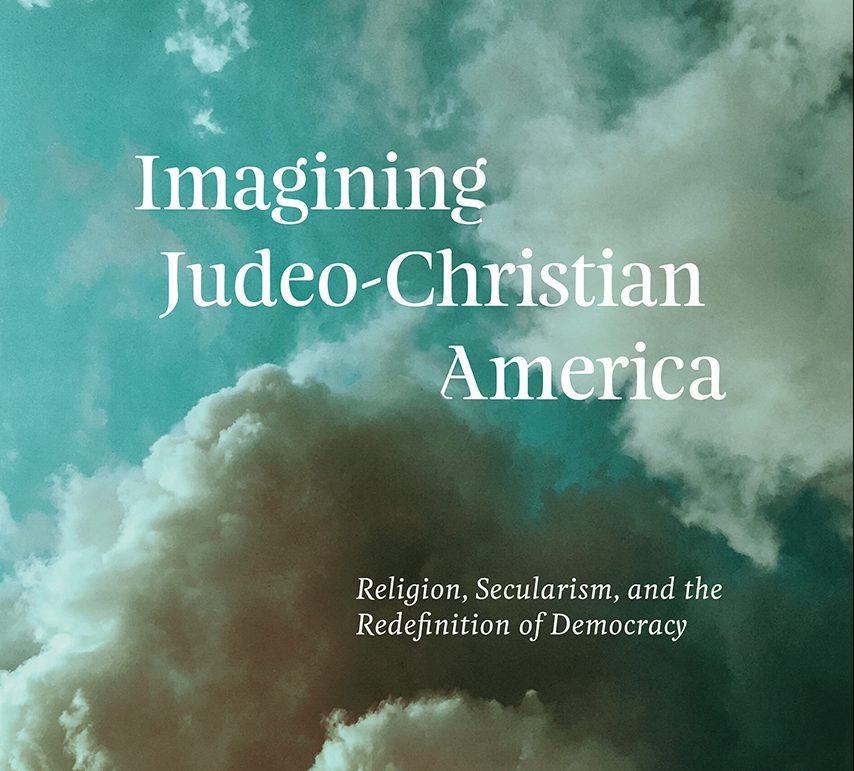 Gaston, a lecturer in American Religious History and Ethics at Harvard Divinity School, begins by establishing a spectrum of viewpoints with “Judeo-Christian exceptionalism” at one end and “pluralism” at the other. Judeo-Christian exceptionalists, a category Gaston invents to demonstrate that “Judeo-Christian” has not always been a pluralist and accommodating idea, not only view Judeo-Christian values and history as the foundations of American democracy and national identity, but also as the only sources for sustaining democracy in the face of encroaching secularism. Pluralists, on the other hand, “grounded democracy in religious diversity and intellectual freedom, not Judeo-Christian religion itself” (12). Advocating for tolerance and civic nationalism, the pluralists welcomed religious minorities and nonbelievers into the fold as they organized a secularized democratic program. After establishing these ideal types, Gaston gives examples of thinkers who occupy a perspective in between, including Christian realist Reinhold Niebuhr and Catholic theologian John Courtney Murray, to demonstrate that “Judeo-Christian” rhetoric has never been monolithic from its origins in the 1930s through the present.

Imagining Judeo-Christian America is written chronologically and divided into three parts. Part 1 locates the pre-origins of the term “Judeo-Christian” in the late-nineteenth-century debates about “Hellenic” and “Hebraic” elements of Western culture, which primarily advocated a supersessionist view of Christianity as drawing on the best of both ancient cultures. As new social dynamics created collective forms of identity along the lines of nation and religion, however, liberal Protestants and Jews teamed up in an interfaith alliance during World War I to counter the narrative that Judaism was a dead religion, instead positioning it as the root of the modern moral compass. In the 1920s, this interfaith alliance incorporated naturalists and Catholics as it began advocating for a secular public sphere to counteract nativist responses to changing population dynamics. By the 1930s, however, the secular public sphere became associated with anti-religious and anti-democratic “totalitarianism,” and “Judeo-Christian” emerged as the preferred social, moral, and political alternative.

Part 2 traces the term “Judeo-Christian” in the post-World War II and early Cold War period. Judeo-Christian exceptionalism flourished as Protestants, Catholics, and Jews identified common enemies in both Communism and Supreme Court cases that increasingly sought to secularize public education. For these religious groups, the two threats reinforced the need to locate the origins of morality and democracy in the Judeo-Christian tradition, which in turn bolstered the West in the global spiritual struggle against atheism. Gaston notes that by the mid-1950s, “the intellectual architecture was in place for an alliance of liberal Catholics and many Protestants against secular theories of democracy and strict separationist readings of the First Amendment” (151). Through the mid-1950s, Judeo-Christian exceptionalism and a commitment to religious revivalism dominated among Protestants, Catholics, and Jews.

Part 3 identifies shifts in Judeo-Christian exceptionalism throughout the latter half of the twentieth century as this perspective loses its hold in an increasingly diverse United States and finds a new home among evangelical Christians and the Religious Right. As Cold War hype and McCarthyism cooled through the 1950s and ‘60s, more open immigration policies resulted in the US religious landscape becoming increasingly diverse. This period also reflected a weakening consensus about the origins of American values and democracy. As secularists and religious liberals backed off the vicious anti-secularism of Judeo-Christian discourse, “Judeo-Christian formulations no longer appeared as naturalized features of mainstream public discourse, but rather as markers of a conservative project to reverse recent changes in American culture and politics” (232). Over the last 50 years, rhetoric that had once been used by pluralists and Judeo-Christian exceptionalists alike has now chiefly become the language of the Religious Right.

One of the novel historical interventions Gaston makes emerges in her discussion of President Eisenhower. Although he was the first U.S. president to employ Judeo-Christian terminology, he used it in unusual ways, which Gaston contends reflected his complex religious background. While historians have traditionally highlighted Billy Graham’s influence on Eisenhower and the growth of evangelical Protestantism under his administration, Gaston argues that by using “our Judeo-Christian traditions” in the plural, Eisenhower recognized that “other faiths could also buttress democracy [which] departed from the prevailing norm” (176). Without a doubt, Eisenhower linked religious commitment to a flourishing democracy, but Gaston’s rereading of his rhetoric was one of the many fascinating vignettes in the book. Another is Gaston’s exploration of how both proponents and opponents of the civil rights, the antiwar, environmentalist, and feminist movements in the 1960s and 1970s used Judeo-Christian rhetoric. Then as today, both sides of a warring culture grow from the same roots, history, and language.

Gaston concludes the book with a reflection on how Barack Obama and Donald Trump used Judeo-Christian terminology throughout their presidencies. Gaston’s scathing critique of Trump’s opportunism and her meditation on how future Americans will both develop new language and reinterpret old terms feel especially relevant as I write this review in the wake of the 2020 election. With the election and its immediate drama (mostly) behind us, now is a good time to turn to the broader themes explored in Imagining Judeo-Christian America. It is a brilliant and well-written book, and a must-read for anyone interested in American religious history, conceptions of democracy, and cultural contests and change.

Brittany Acors is a Ph.D. student in American Religious History at the University of Virginia.