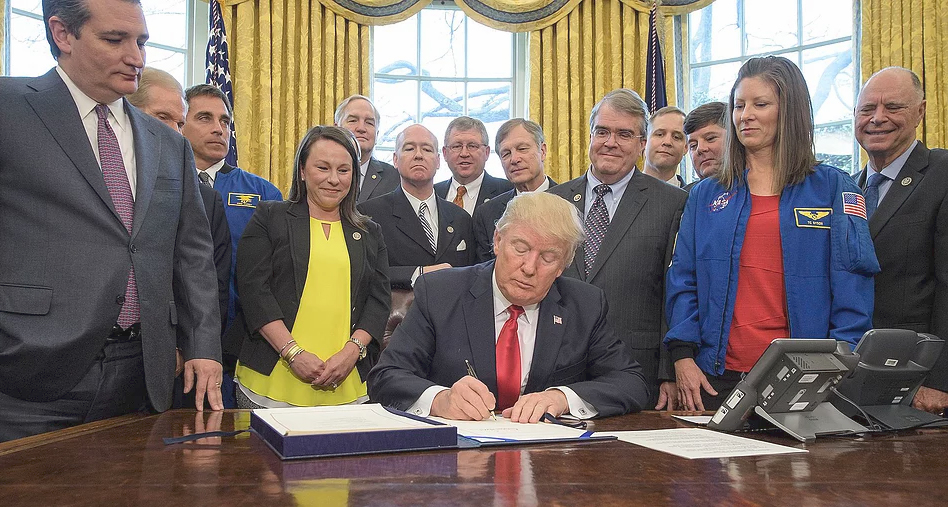 In one recent, desperate week, with the Russia probe threatening the legitimacy of his presidency, Donald Trump unleashed a barrage of messages reminding the country that he is still the man for the job. Recalling his penchant for “locker room talk” and anticipating his provocative “fire and fury” threat to North Korea, Trump shamed his Attorney General for following the rules of recusal, made “jokes” about police brutality, and boasted of his crowd size and win over Hillary Clinton (again) in a controversial speech before the Boy Scouts.

Yet, it was Trump’s proposed ban on transgender individuals in the military that proved most revealing. It suggests that for someone so obsessed with his manly image and proud of his newly-acquired military command, gender nonconformists in one of the most intensively masculine institutions pose an unequaled threat to masculine norms. And while Trump seems especially sensitive to challenges to his masculinity, he has tapped into a pervasive anxiety, not least among fellow, male politicians, some of whom signal that women’s bodies are theirs to grab, punish, and, in one case, challenge to an old-fashioned pistol duel.

Polls suggest that two out of five Americans think the country has become too soft and feminine, and this evinces what many are calling a crisis of masculinity. Due in part to a decrease in “masculine” jobs like construction or mining, many men feel like victims of an economy and society that are leaving manliness behind. Trump’s behavior stokes the grievances of those who believe they are losing out on jobs to immigrants, are made impotent by affirmative action, and are assaulted by a political correctness crafted to discriminate against them. Put simply, these men feel “stiffed.” Trump’s announced ban of transgender people from the military and continued vilification of his female election opponent assures his followers that he can restore men to their proper place.

Masculinity crises are not new phenomena. Nearly every male generation peers back nostalgically to a simpler past when men were allowed to be men, when they displayed the grit of a cowboy or valor of an Iwo Jima marine (both occasions where “real” manliness was pitted against a male ethnic other). All of this before feminism became fashionable and gender identity a matter of choice. When America used to be great, people knew what a real man looked like—they reason—and maybe Trump can make it great again.

Despite its generational recurrence, this diagnosis is not unfounded—men are experiencing lower rates of employment, for example. Yet, the label risks feeding a victimization narrative. The crisis of masculinity is more accurately described as a legitimation crisis of masculinity. This points to a deeper, more sinister pathology, trading on fears of losing control and reasserting masculine “norms” (sometimes by violent means) in response to the disruption of “long-established and powerful ideals for men’s lives” and sense of self.

The problem is not that men have been culturally and politically neutered. Rather, when the social system that has maintained male power is openly questioned and experiences tangible resistance, men entrench themselves ready to fire back against anyone who confronts the legitimacy of their cultural and political authority. Public displays of virility from the White House are both a goad to and a symptom of this larger cultural problem: a toxic masculinity, defensive and often aggressive, that infects the public consciousness and the structural systems of society.

This coincides with a rise in white nationalism and what Robin DiAngelo has coined “white fragility.” In this case, there is a white, masculine fragility, fueled largely by Christian working class people defensive and frustrated because they suspect that “others” are cutting them in line. All of this rings eerily similar to historian Doris Bergen’s assessment of 1930s Germany in which men felt delegitimized by their loss in World War One and began to exclude men of other ethnicities and religions from what counts as a real man. Like those gloried times past when men defended their women from racialized others, today even black and Latino men present threats to (white) masculinity; any success they achieve competes with the status of white men.

The reality is that this is fuelled in part by evangelical anxiety. Grievances over the perceived perils of feminism, LGBTQ rights, and immigration—and desires to “take back” America from these liberal forces—are recorded most commonly among the white evangelical males of Trump’s base. 81% of white evangelicalsvoted for him, choosing to overlook – and sometimes maybe even embolden – his misogynistic flaws.

And this makes sense theologically. The valorization of Christian machismo is rooted not only in the patriarchy that marks evangelical faith, based on interpretations of the Apostle Paul’s teaching about women’s roles, it is also the legacy of the colonialist theology that helped birth this nation.

The marriage of masculinity and white supremacy boasts a strong union. During the period of European exploration and expansion, Christian theology became filtered through a masculine colonial logic. As Willie James Jennings argues, when Europeans encountered the native inhabitants of Africa and America, their masculine missionary impulses to simultaneously evangelize and conquer contorted their theology into one framed by comparison: sorting others into insiders and outsiders, those further from and closer to themselves—the Christian norm of the white European male. This competitive and evaluative focus continues to hold captive the modern Christian imagination. Any upstart “other” challenges the legitimacy of the stable masculinist economy established within this tradition.

Ultimately, Christians are responsible for giving voice to toxic masculinity, and for giving it a name and face in the White House. This must be resisted on a political level: the twin evils of white supremacy and toxic masculinity must be combatted by forming coalitions across all of those imperiled by white male fragility and their allies. Considering its theological origins and engines, white toxic masculinity must also be contested with better theology, compelling to those evangelicals feeling most embattled. I am thinking ofworks like that of biblical scholar Brittany Wilson, whose book, Unmanly Men, demonstrates the way scriptural figures like Zechariah, Paul, and Jesus shed “manly” characteristics in order to fulfill their divine calling. These stories challenge the assumptions of Christian masculinity and create alternative narratives of manhood—dependent and vulnerable, compassionate and meek—that may be able to trump the legacies of white toxic masculinity.