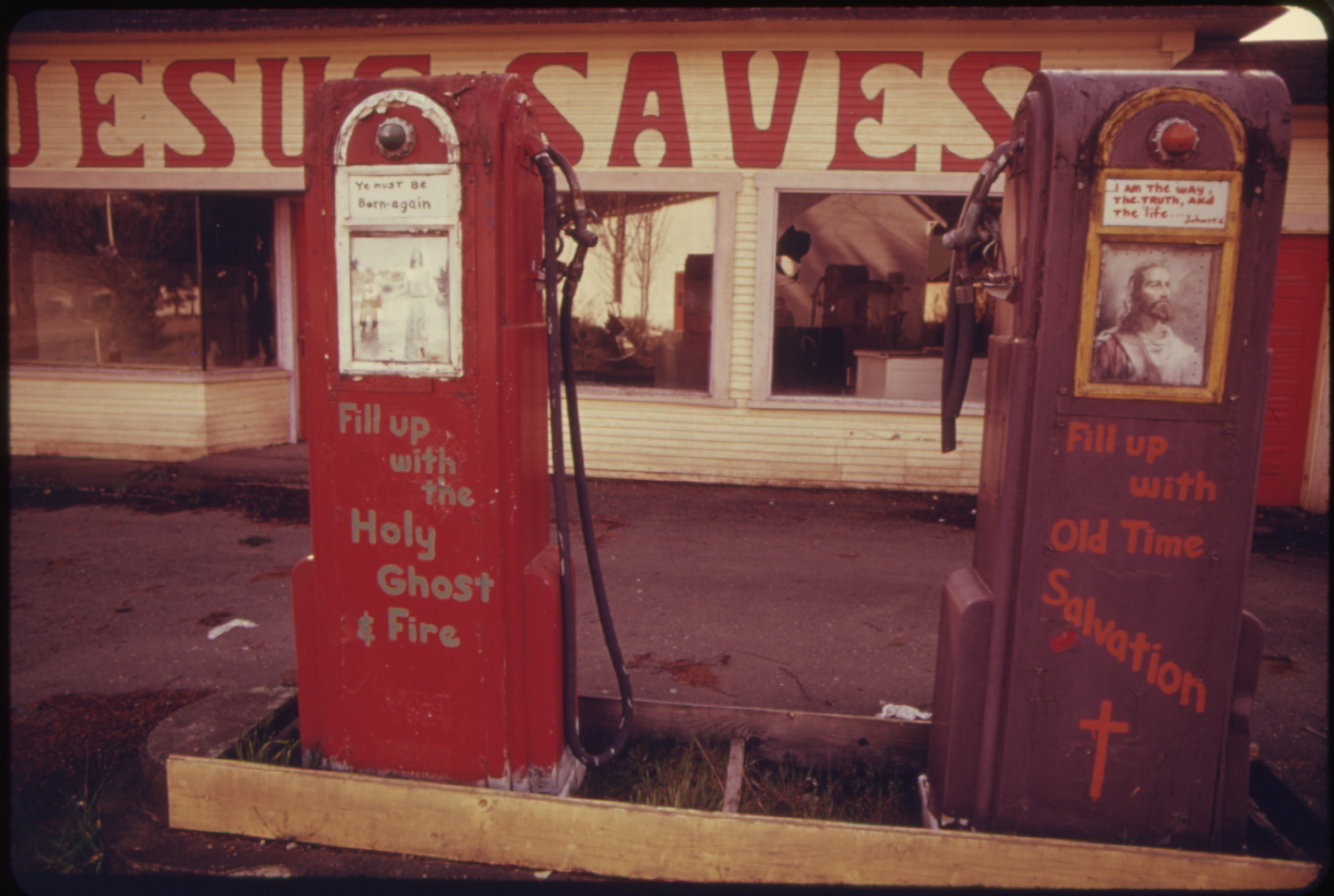 Editor’s Note: This is the first in a series of four responses to Darren Dochuk’s Anointed with Oil: How Christianity and Crude Made Modern America, the subject of a roundtable discussion held at UVA in April 2019. The other three responses are by Brittany Acors, Kathleen Flake, and Matthew Hedstrom, and Dochuk offered a response to the responses as well.

How did so many American Christians in the twentieth century come to be seen as natural allies with the politics of free enterprise? Over the last decade, the field of American religious history has puzzled over this question. Occasionally the literature suffers from a conspiratorial tilt: Some industrialist or maybe an economist comes along and realizes they need, say, evangelicals on their side—maybe as loyal right-wing voters, maybe as pliant laborers, maybe both—if they’re going to succeed in their business ventures. So, they conspire to convince their audience that the gospel and small government go together. The result, time and again, is a bunch of evangelical Kansans seemingly tricked into voting against their own interests.

Darren Dochuk’s work has consistently sought to tell more complicated stories about these relationships. In both From Bible Belt to Sunbelt and Anointed with Oil, the people enmeshed in webs of religious, political, and economic relationships are never mere dupes, convinced by some wealthy conspirator that their faith necessitates assent. Rather, Dochuk’s work gathers together more complex sets of dispositions, aspirations, and concrete experiences that help account for the way various religious communities have entered into partnership with capital and its political allies.

So, while many existing narratives in the history of American Christianity use the evangelical/mainline binary as their basic starting point, Dochuk’s practice of drawing together a more complex set of regional, religious, political, and economic aspirations and associations helps generate less reductionistic categories. In Anointed with Oil we’re introduced to the significantly more capacious categories of “wildcat Christianity” and the “civil religion of crude.” The civil religion of crude is best exemplified by the Rockefellers of Standard Oil, whose preference for order and bureaucracy was reflected both in their brand of ecumenical Protestantism and the integrated supply chains of major oil. Wildcat Christianity’s best exemplars are the Stewarts of Union Oil and the Pews of Sun Oil, who preferred to act alone in unmediated encounter with God and oil alike, reflecting their evangelical piety and the chaotic world of independent prospecting. Throughout the book, the triangulation of oil, wildcat Christianity, and the civil religion of crude casts new light on many familiar episodes of American religious history, like the fundamentalist-modernist controversy, Christian Zionism, and the rise of the Religious Right. On this latter point, more conspiratorial tellings focus on those evangelicals who were convinced of free market virtues by videos about pencils dreamt up by the Chicago Boys. Thanks to Dochuk’s efforts, we must reckon with the way those same ethics of individual free enterprise and minimal government intervention were being worked out by wildcatters in the oil fields a century prior.

But how exactly does this work? If in From Bible Belt to Sunbelt, Dochuk’s subjects mix a regional identity (plain-folk southern whiteness) with a material experience (their dramatic upward social mobility) and this results in important political outcomes (the evangelical alliance with the New Right), then what precisely are the factors at work in the intimate relationship between oil and religion presented in Anointed with Oil?

Here, I wonder if oil itself, as a material thing, can help us account for the conditions that drive this story. It creates networks of stakeholders. It shapes the way they imagine both how they might enrich themselves and how they might save the world. And it is precisely what fuels those efforts. In this way, oil lets us add a concrete, material basis to these deliberations, helping us move beyond the more immaterial categories of discourse and language in our own efforts to understand the forces that structure the political and religious possibilities of modern life.

So, my central question for this book is: does Anointed with Oil suggest that we should acknowledge oil itself as an agent in this history? The book’s prose at times seem to allude to this possibility. Its own unpredictable movements and actions, with the experiences it produces—the fortunes, the injuries, the chaos—seem to drive much of the action. And beyond the prose, historical details regarding the origins of the rule of capture—English laws governing the hunting or capture of animals that cross property lines—suggest that states, at the very least, were well aware of the way that oil has a mind of its own.

I think this raises two related questions. First, how do the specifics of the differing material relations with oil, those of wildcatters prospecting in the untamed oil fields and those of civil religionists of crude overseeing complex supply chains from the comfort of the board room, create slightly different outcomes? I think it’s easier to see how Wildcatters’ material relations with oil—as it gushes from the earth with no warning, covering workers bodies in black crude—shaped their sensibilities, but what about civil religionists of crude? Does their bureaucratic elaboration of these systems separate them from the material power of oil itself, or is it just a slightly different set of relations?

And second, are there conditions that oil creates universally, across the spectrum of wildcat and civil religion? Throughout the book, we see several points where oil seems to produce consensus across the divide, but the one that stands out most to me is the steady anti-collectivism and anti-unionism that characterized both major and independent oil. Most readers may be familiar with the violence carried out on the Rockefellers’ watch at the Ludlow massacre in 1914, but the Tulsa Outrage three years later will be new to many. (It was to me.) The image of J. Edgar Pew and his friends dawning black robes and hoods, abducting 17 Wobblies, and silently torturing them with a cat-o’-nine tails is now forever burned into my memory.

In short, the spirit of anti-unionism, anti-collectivism, and anti-socialism that unites wildcatters and civil religionists at multiple points in the story is where we seem to see the most abiding consensus. Here, I wonder if reading Anointed with Oil with the possibility of crude’s own agency in mind can help us consider the way in which oil itself has helped confine the possibilities of religious and political change; our dependence on crude may end up protecting capital’s privileges of unfettered accumulation at all costs, even when it demands grotesquely violent means.

Kevin Stewart Rose is a doctoral candidate in American Religious History at the University of Virginia.