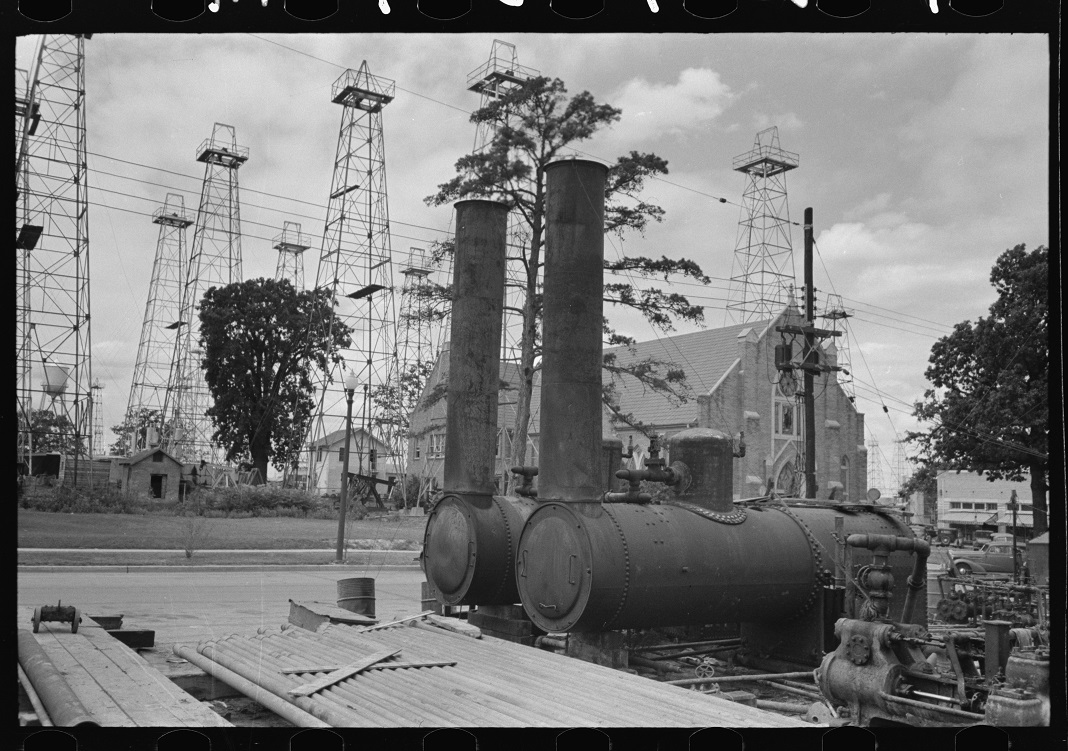 Editor’s Note: This is the second in a series of four responses to Darren Dochuk’s Anointed with Oil: How Christianity and Crude Made Modern America, the subject of a roundtable discussion held at UVA in April 2019. The other three responses are by Brittany Acors, Kathleen Flake, and Kevin Stewart Rose, and Dochuk offered a response to the responses as well.

I first heard about this book, I think, 11 years ago when I saw Darren toting a massive volume on the history of oil around the halls of 5 Ivy Lane in Princeton, where we shared offices as postdocs. Though he was still finishing From Bible Belt to Sunbelt, Darren was already planning this book, his own magisterial history of oil. I am thrilled now to see that work come to fruition, and astonished at what Darren has accomplished.

The first aspect of Anointed with Oil I want to acknowledge is the research. More than anything, what stunned me about Darren’s first book, From Bible Belt to Sunbelt, was the depth, extent, and creativity of the archival research, and Darren’s capacity to corral that material into narrative and argument. This new book takes that same doggedness and creativity, ambition and energy, to a much vaster and even more complex stage.

Research at this scale is its own kind of resource extraction—both from the archives, but also extraction of time and financial and institutional support. As someone who aspires to work in similar modes, I’d love to hear Darren’s reflections on what working in this way, at this scale, requires, both the toll and the rewards, if he has the space and inclination to indulge us with these scholarly details in his response.

Most substantively, what strikes me most about this book, for the field of American religious history, is what I am tempted to label the “new religious geographies” or “new religious cartographies” it offers us. I mean this in two senses. On the one hand, the topic—oil—demanded of Darren a reach in space and time that far exceeds the usual in our field, moving across centuries and even more significantly across regions and nations. And indeed, the book simultaneously illuminates distinctive regional histories—western Pennsylvania, Texas, California—while also telling us about the nation as a whole, and then even further about the nation in relation to other nations, the nation in the world. Like Melanie McAlister’s recent international history of evangelical missionary work, The Kingdom of God Has No Borders—but like too little work in US religious history—Darren’s book moves through and across these various geographical registers, and does so deftly, at the narrative level, and with great intellectual payoff.

But secondly, Anointed with Oil provides us with new religious cartographies, new angles of vision that flow directly, I think, from the topic itself. “The civil religion of crude” and “wildcat Christianity” take us beyond the often-stale categories we so often, too often, default to, in religious history:  liberal and conservative, evangelical and mainline, premillennial and post-millennial.

This new religious cartography, these new mappings of American faith, do not in Darren’s hands, to be clear, supersede or replace the old categories, but shade and complicate them, and even more draw our attention to previously un-surveyed outcroppings and depressions on the landscape.

This is what fresh categories and new vocabularies do, as well as damn good narrative writing—they help us see behind the categories to the humanity that is the only thing that makes meaningful what we as humanists do. Darren’s categories, civil religion of crude and wildcat Christianity, come not from theology as such, though of course they are theological, but from the material world of political economy. From life, in other words. From history.

I was thinking about this as I read the book, and then found the wonderful discursive footnotes on pages 578, 579, and 580 in which Darren spells this out himself. Readers can look forward to fascinating discussions even beyond the book’s main text.

Regarding evangelicalism, he writes: “While evangelicalism is a key component and protagonist of wildcat Christianity, the latter category speaks to wider permutations of religious experience, identity, and belonging tied to the peculiar capitalist structures, notions of and encounters with land and its resources, and concepts of time and space nurtured in the extraction zones of the oil patch—arrangements and forces that Catholics encounter and process as well. In this regard, I am also interested in the degree to which my subjects’ encounters with the soil and its subsurface materials suggest an environmental ethic that was more syncretic, esoteric, and dynamic than most histories of evangelicalism and environment suggest.”

Which makes me wonder:  what other conceptual pathways might parallel intellectual projects open up, now that Darren has shown the way? In his response, I’d love to hear Darren’s thoughts on that, but also any further reflections he might share on his categorical innovations, civil religion of crude, wildcat Christianity: when in the process these came to light, and how he sees them in relation to the standard categories in the field. Certainly in my own work, currently on the UN and the religion of “one-world,” I’ll be consumed with these question, and I am sure I am not alone.

A generation of historians in American religious history, I am certain, as well as in other fields of cultural, intellectual, and political history, will read this book and think, “I want to write and think like that.” I congratulate Darren on this monumental achievement.

Matthew Hedstrom is an Associate Professor of Religious Studies at the University of Virginia.