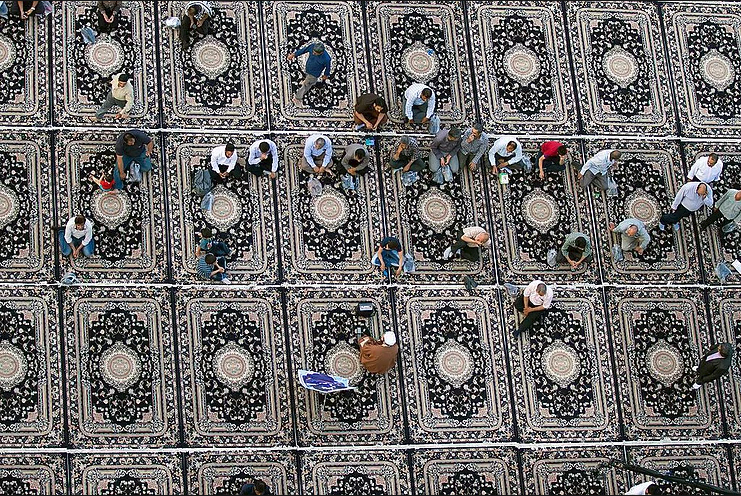 When your democratic republic and unchecked global, political, and ecological trends feel as though they’re hurtling in chaos toward the sun, it’s nice to receive good news.

A recent study by the Pew Research Center on Religion and Public life puts that good news right up in the title, “Americans Express Increasingly Warm Feelings Toward Religious Groups.” Even the subtitle is mild: “Jews, Catholics, continue to receive warmest ratings, atheists and Muslims move from cool to neutral.” The study frankly reads to me as though pant-suited normality sat in the Oval Office or in the Situation Room, and November ninth hadn’t run America off the norms of civil discourse and of reciprocal toleration.

“Asked to rate a variety of groups on a ‘feeling thermometer’ ranging from 0 to 100, U.S. adults give nearly all groups warmer ratings than they did in a June 2014 Pew Research survey,” says the February 2017 report. I’d like to live in that America.

In my America, the headline news is grim: “US Islamophobia: Threats and acts of vandalism against mosques double so far in 2017.” Some state house offices are downright refrigerator-chilly to Muslims. The office of Representative John Bennett (R., Oklahoma) handed an Islamophobic questionnaire to three students that tried to meet with him.

Similarly, Jewish Americans may be up on the “feeling thermometer,” topping out all rivals at 67 degrees. But the desecration of cemeteries in St. Louis, Philadelphia, and Rochester made national news, while there has been a spate of bomb threats made against Jewish centers. The Anti-Defamation League is keeping a running tally.

This Pew report presents some perplexities for “Religion and its publics.” Among them, how can we hold together these competing truths?

Like many scholars of religion trained in the humanities, I’m dubious about social science surveys as a method of knowledge production. American’s cultural appetite hungers for insights that are quickly consumed. This shapes a preference for the data of social scientific methods.

Then again, I’ve learned of late to check my “confirmation bias” around data: to be alert to that trip-wire. I don’t want to be a cynic. But the Pew report prompts my skepticism. Here’s why.

A conspicuous factor of this survey is its “thermometer scale.” Why did Pew select a temperature gauge as its preferred metric? As a scholar of religion with feminist convictions, I am gratified to see Pew acknowledge the power of affect. But I am also alert to gaps between expressed affective warmth and action. Do expressions of relative warmth or coolness track with values of liberal democracy, such as public demonstrations of respect and mutual accountability?

For instance, it strikes me that Christians at least are primed to understand that affirming love is a virtue that speaks well of the practitioner. Indeed, the test of Christian love is not whether the object of love is worthy of mutual respect. Love to the stranger, the prostitute, the taxpayer. “Love the sinner, hate the sin.” For members of this religious community, at least, expressed warmth toward another religious or non-religious group may say more about the respondent.

In theory this bias toward affective affirmation would be controlled by the comparative/longitudinal nature of this survey. This publication, for instance, emphasizes change over time.

Nevertheless, we must consider the power of performance among those surveyed. After all, respondents are explicitly primed in the interview to be alert to themselves explicitly as religious practitioners/non-practitioners. In their responses, they are making a certain kind of public appearance. That is to say, even if the data are aggregated, even if they are coded and anonymous, individual respondents are nevertheless declaring their values to themselves. Survey respondents may well be performing aspirations of their community of formation. These aspirations may be civic, “More perfect union,” or may be religious/non-religious, “Do unto others….”

From that position of curiosity, we could then consider further how these reports, gathered at a particularly tense national moment, might be conditioned by felt anxieties of crisis and division? The dates on which this survey data were collected, Jan 9-23, 2017, are conspicuously close to the inauguration of America’s 45th President. The trend of affirmation of other religious groups is conspicuously elevated from the prior survey date (June 2014), and leads me to wonder whether they are aspirational?

As noted in the survey analysis, the survey was carried out “On the heels of a contentious election year in which partisan politics increasingly divided Americans.” To get inter-textual on social science, perhaps it’s not incidental that in January 2017, Pew found that, “Fully 86% describe the country as more politically divided today than in the past.” 71 percent expected the political divisions to persist or to worsen.

Perhaps given the opportunity to assess their fellow citizens on a metric other than party, Americans chose to affirm. On this analysis, is it conspicuous that evangelical Christians, the group that tracked most closely with support for President Trump, was the only religious group whose “likability” did not rise substantially?

Similarly, it would be interesting to consider with Pew whether and how perceptions of religious “others” track with the reported experience of those co-citizens. At stake in this question is whether it matters to members of religious groups (as majorities or minorities) how they are perceived by a statistical sample. Or do we learn more about America and religion when we take the “temperatures” of how we are perceived by others?

Does statistical expression of how one’s in-group is perceived (not, as the survey asks, how one perceives one’s in-group) cohere or contrast with these data on how one’s group perceives an out-group? Then we can better ask such questions as: what is the power of exceptionally “frigid” acts or actors, such as desecration of a gravesite? Or similarly, do reports of affective “warmth” by silent majorities toward an out-group track with actions, such as advocacy and intervention? What metric of relative religious co-existence does or should the American media report? The affective silent majority? Or the statistical outliers, perhaps more likely to commit acts of aggression and discrimination? Finally, if Americans of a particular community report anxieties that track with the actions of bad actors – actors who may be statistically a disproportionate minority – to what end is the Pew data informative or misleading?

Do scholars of “Religion and its publics” in the humanities need to learn more about, and perhaps be more involved in, the metrics and design of these studies? More importantly, are academics doomed to be masters of suspicion? Or will I one day know when good news crosses my desk?

Mara Willard is assistant professor in the department of religious studies at the University of Oklahoma.